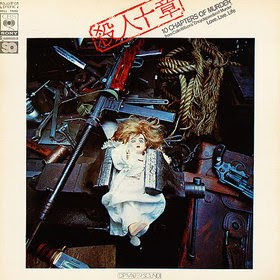 I've known about Love Live Life + 1 for roughly 20 years, but wasn't aware the group had a second album until recently (thanks to Prog Not Frog!). It's a concept album about various incidents of nefarious killings (anything from the St. Valentine's Massacre to the Holocaust). Musically the mood doesn't really fit the concept, as it's a real hodge podge of sounds. Anything from instrumental funky wah wah cop show themes, to avant garde indigenous music, to ragtime jazz is featured here. Whatever it is, it's definitely underground 1970's Japan - where anything goes! Honestly it doesn't remind me of the other LLL+1 album at all, and should be strictly considered on its own. Plenty of psychedelic guitar to keep an underground rock fan interested - but be prepared for many changes in style. It's a borderline Priority 3 piece, but there's enough here to satisfy most listeners I think.

(According to a comment from an anonymous reader, this album has been reissued. It's from 1997 on Super Fuji. I'm sure the CD is now as rare as the album itself! I'll leave it here though, as it's not something anyone can easily buy I'm sure. Thanks for letting me know!)

The Alaskan Connection has countered the above comment: "This CD doesn't actually exist. It was supposed to come out in 2007 (not 1997), but Sony (who own the rights) killed it off at the last minute. The "Super Fuji Discs" mentioned is a subsidiary of the Japanese record store Disk Union, who sell tons of rare LPs throughout Japan. They were involved in the mastering of the CD, but the whole thing had to be shelved after a while. "

Well I've certainly never seen one. So for now we'll consider it not reissued as The AC knows the Japanese scene very well.

Priority: 3
Posted by Purple Peak Records at 8:22 AM

it was reissued on CD in 1997 by Super Fuji Records, catalog # is FJSP-1.
See http://blog.diskunion.net/user/kaneno/superfuji/6610.html