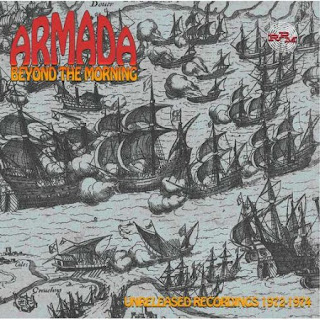 We just returned from a week long vacation without computer access, and generally when I do that, the news comes flying in. But not last week. However this one did catch my eye, while reviewing The Laser's Edge latest additions. RPM is one more wing of the Cherry Red series of labels, and our site usually features their Esoteric imprint.

I'll copy in Ken's description here. It definitely sounds interesting! "Archival collection of unreleased recordings from an unknown British prog rock band that existed in the early 70s. No one in the band that is particularly well known although the leader Sammy Rimington apparently has been active in the US jazz scene for decades now. Rimington is the band's guitarist. He also plays flute and sax. The material has a strong emphasis on flute leads but offers up some nice cutting guitar leads as well. Vocalist Terry Cooke isn't a mind blower but he's certainly up to the task and contributes flute as well. The label hype references early Genesis, Frank Zappa, Mahavishnu Orchestra, and King Crimson as influences. Frankly the only one I can say I hear is a vague comparison to Islands-era Crimson. There is a jazz influence but I wouldn't really call this "jazz rock". This is prog rock that would have easily fit on Neon or Vertigo. Sound quality varies from"yeah I guess this is OK" to "perfect". Quite a nice discovery and essential for anyone interested in early British prog."
Posted by Purple Peak Records at 5:43 PM