News: Arcangelo to reissue Ragnarök's "Fjärilar I Magen" in November! 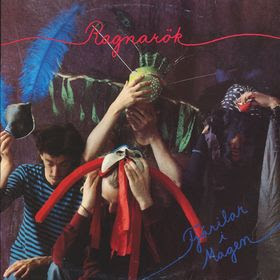 Arcangelo, the CD label for Japan's Disk Union record shop, has announced their intention to reissue Ragnarök's "Fjärilar I Magen" in the mini-LP format on November 9th. Now this is interesting, because in general Arcangelo works in conjunction with other labels that do the initial reissue. But Fjärilar I Magen has never been reissued to date. And I have not seen any other announcement associated with this release (for the record they are also reissuing the first Ragnarok - which was done by Silence many years ago). And that's the other part of this story: Silence usually doesn't license out any of their catalog. Recently there was an exception with the Psykofon label concerning Handgjort. So either Silence is indeed behind this, or the band obtained the rights themselves, or a mystery label is behind it. Time will tell I guess.

Anyway, great news as this album has many fans including me. This gives me hope that maybe one day we will see the first Flasket Brinner album after all!

In fact, "Fjärliar i magen" was released in Japan some years ago:
http://rateyourmusic.com/release/album/ragnarok/fjarilar_i_magen_f1/

Yea, I saw that too. But did it really come out? That's the Silence catalog number. Any idea what year the CD was released?

I think so, I have it on CDR with the artwork. If you like I can send a ripped copy of the whole thing as WAW files?
I don't know what year it was released though, but I think sometimes around 2005 (but that's just a guess).

Interesting. I had no idea it was reissued prior. I do have the original LP, and I'm going to buy this new CD when it becomes available. Thanks for the offer though!

Yes, It is. Would you please care to send me a note when it's been released?