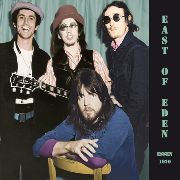 I first reported on this title back on April 14th, but we now have a cover and more info, so I'm moving it forward to today.

Continuing with their "Essen" series, Garden of Delights, on their Thors Hammer sub-label, will release a 1970 concert from East of Eden. Like the May Blitz show from this series (which I still haven't heard), I would imagine East of Eden would be a very creative band in live form. For my money, "Mercator Projected" is one of the greatest albums of the 1960's. How's that for a bold statement? But I'm serious here. And 1970's "Snafu" is also fantastic. I'm most interested in how this will turn out.

Further notes on this release: "East of Eden from Bristol in England played elaborate progressive rock with saxophone, violin, and flute. Their only hit, “Jig-a-jig”, ist not typical for their music. The band can look back on a history of eleven long-players, not counted the many compilations. On Thursday, 22nd October 1970, the group performed in the Gruga hall at the third Essen Pop & Blues Festival. The event was recorded semi-professionally by the promoters. The recordings were mastered now in a first-class sound studio with great effort and care. The sound, however, is naturally not as good as that of the studio LPs. The 32-page booklet contains a long band history in German and English, a detailed discography, numerous cover repros as well as a personal retrospective report by Dave Arbus. A must for collectors. It is the first legitimate release of an East of Eden live recording and comes both as CD and as LP."

Gnosis Mike says: "Tom, I think I have a video from East of Eden in 1970 and it's definitely third album mode. I'm not sure how much they toured on Snafu or if they just rejiggered the line up, but there's very little early East of Eden in live form. Unfortunately cuz I'm with ya on the first two."

I should also point out for you vinyl collectors out there, that GoD will also release many of their CDs on LP (Vita Nova, Tyburn Tall, Sunbirds, Sub, Siddhartha, Lightshine, Gila-Bury My Heart). None of them caught my eye personally (you can read about my criteria for buying LP reissues here), but since vinyl is all the rage at the moment, I suspect many will rejoice. I probably would have gone for the Sunbirds, but I already own the original LP of that one. I'm still hoping they'll release the CD of Sunbirds' Zagara this year!
Posted by Purple Peak Records at 7:44 AM

According to the vinyl boot that I used to have ("Sound of East of Eden Live!" on Hablabel, which came out somewhere in the 1980s), they still played plenty of Snafu stuff in 1970 - like "Ramadhan", "Xhorkham" or "Nymphenburger". And even the sole third album rendition on that record, "Crazy Daisy", sounds way better live than the relatively uninspired version found on the self-titled third album. I'm not sure if Garden of Delights are in a possession of the same tape (which is believed to originate from Norwich), or it's a different show altogether, but I have high expectations for this release. As the vinyl boot indicated, they were a killer live band.

Cool - that sounds very promising if it's indeed the same, or a similar, show. Thanks for the comment Lev!