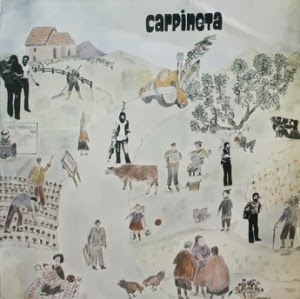 And as promised yesterday, here is that new Italian discovery from The AC. Of all the countries that have had almost complete reissue coverage in regards to progressive music from the 70s, Italy is most certainly in the lead. Though this one does fit the profile for the few that still remain like Gramigna, Ultima Spiaggia, Arpaderba, Roberto Picchi, Orchestra Njervudarov, and others. All the same, Carpineta up until now, is a complete unknown. And it's fantastic! Much of what I just said is far more detailed in The AC's review below.

For quick reference, I'd say Carpineta tracks closest to Canzoniere del Lazio at the end of their storied career (Morra 1978, Miradas). That is - at their most progressive! Mid 70s Area also deserves a shout out, as well as artists as disparate as Gramigna, Franco Battiato, and even Aktuala. For my tastes, Carpineta surpasses all of them. Yea, it's THAT good.

OK, enough of my 30,000 ft view. Let's get down to The AC's much more professional reading liner notes: "There's probably no individual progressive rock scene from the classic 1970s era that has been more thoroughly excavated and cataloged than the Italian one. Massive printed tomes and comprehensive web archives are devoted to it, and a multitude of record labels have left practically no stone unturned, reissuing almost the entire back catalog of noteworthy albums, often multiple times over. A quick glance here at the CDRWL will confirm this, showing a relatively paltry selection of Italian LPs, most from the more obscure jazz/fusion oriented corner of the scene. A few well-known items (like Orchestra Njervudarov or Canzoniere Del Lazio) have somehow managed to avoid reissue, but overall it's pretty slim pickings. The continued passionate following (and incredibly high prices of many originals) have necessitated a very active reissue scene, and created a legion of dedicated collectors, both locally and abroad, who over the ensuing decades have dug to the very bottom of the well in hopes of unearthing that one last Italian gem. So it's with great surprise that I offer this particular album up for your inspection, as it does seem to be a genuine specimen of that rarest of birds - a previously undiscovered Italian progressive LP from the 1970s, not (to my knowledge) ever mentioned in any of the standard Italian prog references or encountered by collectors until just the past year or so.

Hailing from the ancient province of Cosenza in southern Italy, Carpineta seem to have been named after a type of tree, although turning the record sleeve over will reveal that each letter of the name seems to stand for something, possibly making it an acronym: "Carpini Abbandono Rabbia Pianti Incontaminazione Nord-africa Emigrazione Trasformazione Abbrazzamuni". Really rolls off the tongue, eh? With a name like that, and being from 1978, you might be able to guess that we're within the realm of that strange and uniquely Italian take on avant-prog and RIO that proliferated (on a relatively minor scale) from the mid 70s through the early 80s, in the wake of the classic early 70s prog scene's demise, rising in tandem with (and sometimes related to) the increasingly popular jazz-rock/fusion movement. But as I'm sure you know, this whole little mini-movement was quite diverse and hard to put a finger on, mixing in elements of progressive rock, jazz/fusion, Italian folk, pop, ethnic/eastern and avant-garde elements in wildly varying combinations. None of these albums really sound alike, even if you can kind of pigeonhole them due to the time, place and politics. Carpineta are no different, in being completely different. Does that even make any sense? In any case, what we have here is a mixture of elements that's not easily summed up. It opens with an abstract piece full of droning reeds (the "zampogna", a characteristic southern Italian bagpipe, is frequently used on this album, although often in a way that almost makes it sound like an eastern instrument), clattering percussion and declamatory vocals. After that we move into avant-prog territory, with varied but cohesive songs featuring elements of prog, jazz-rock, indigenous southern Italian folk and even psychedelic rock. There's a wide instrumental palette here, as aside from the standard progressive rock instrumentation and impassioned Italian vocals (which at times are sung in the local dialect, which seems to be somewhat Greek-influeced, if I'm not mistaken) they utilize various wind instruments, exotic percussion and also indigenous elements like the previously mentioned zampogna, mandolin, etc. However, the two things that really stand out are the electric guitar work and the drumming. The lead guitar is often played in an almost anachronistic psychedelic style, loaded with fuzz and distortion, while the drummer sometimes freaks out in a nervous, twitchy jazz-inflected way, unleashing rapid-fire rolls and fills like Furio Chirico after downing a few too many cappucinnos. This all really comes together on side two, in the manic and appropriately titled "Storie di cose nostre", with vicious lashings of fuzz guitar, hyper-active drumming and angry screaming vocals, creating one of the most relentless tracks you'll ever hear on a 70s prog LP. But naturally this is followed up by a mellow, sunny Italian folk-oriented song. And so it goes. A fascinating album that I've found myself returning to again and again, which certainly deserves to be reissued and discovered by the wider Italian prog fanbase. Hopefully someone in their home area can find these guys and get on the case!

By the way, the "Mu. Co." label was either their own private imprint or a tiny local interest. It has no relation to Mu, the well-known Turin prog/fusion label from the same time period (Zauber, Esagono, etc.)."