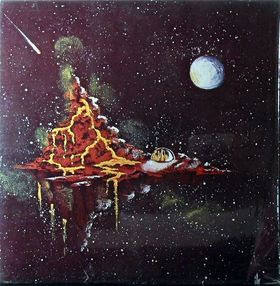 Beyond - Music and Beyond. 1980 Tuhlottesound.

Here's an album my buddy Jeff turned me onto years & years ago. And to be honest, it never really grabbed me. Until now. As usual, he was right all along, and it's really a very good LP worthy of recognition.

Generally you'll read the group is from Texas (mainly due to an error in the Acid Archives book). But actually they're from Tulsa, Oklahoma, and the management of the group is from Coffeyville, Kansas (on the border with Oklahoma). Jeff met the drummer years ago and confirmed the data. So I suspect various members are from the NE OK, SE KS area.

Dec 2013 update: OK, I now have the vinyl of this. The record is officially on the Tuhlottesound label (one word) and is based in Copan, Oklahoma - which is north of Bartlesville, Oklahoma near Coffeyville, Kansas as stated above. The album was further mastered in Dallas in 1980 so that would be the final release date.

The music is a mixture of classic hard edged arena rock and all-out complex progressive rock. A little heavier than the usual Midwest progressive rock sound that we've featured extensively with a small to non-existent keyboard presence, but in reality Beyond were under the same influence as other groups from the region. Converse to tradition, Side 2 is the more commercial oriented part of the album, and it leaves one with a slightly bitter taste at the end (which is why I think the album never resonated with me prior). The complex songs do recall Astre, another Tulsa based group. Some fantastic acid guitar throughout, with some fuzz bass, and even some jazzy tuned percussion. A very cool relic from America's heartland.

Thanks again goes to Moe Curly for the reminder on this one.

Years ago, when living in MO, we had friends from Coffeyville, KS and her parents knew one of the band members (I am sure it was not the drummer). The guy was a bit weird, but I was able to get 10 or 15 copies OF THE ALBUM.

Nice job Esoterico! Thanks for the comment and the confirmation of the Colfeyville location as well.