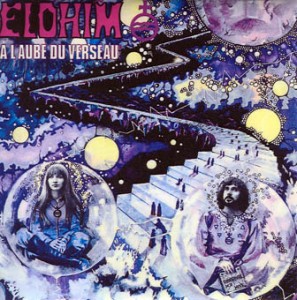 Another one from Thursday night's CD-R revisit program. Had this in the main list, and it's one that has grown on me over time. It's much more progressive than it appears on initial impact.

Screwball rock / folk / progressive album that is part theatrical, part glee club, part hippy dippy mysticism. Dual male/female vocals dominate the proceedings, but this isn't a traditional folk album by any stretch of the imagination. The instrumental sections definitely come off the bench in relief, but are creative enough to warrant a few listens. If you're looking for something entirely unique, this may fit the bill. Different Elohim than the 1983 neo prog group, which was reissued by Musea years ago.