News: Collusion to be reissued on Audio Archives 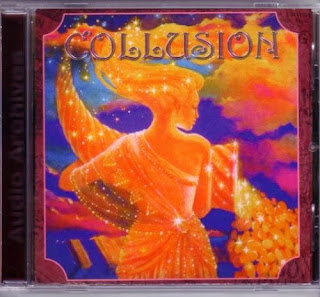 I'll be honest and state upfront that a lot of these Audio Archives discoveries of the past few years have been disappointing. I actually thought this was another archival release, but it appears to have been released in 1971 on the SRT label. Guessing SRT to be some sort of custom pressing plant, similar to our own RPC. In any case, I couldn't find any evidence of the original vinyl, have never seen one for sale, and it hasn't been on ebay before. Which means little of course, just data points.

Having said all of that with a pall of doom, I do have to admit this album looks to be intriguing. It certainly reads that way in any case. We'll keep an open mind, and hope to be pleasantly surprised.

Label says: "Reissued on compact disc, this is a genuine prog rock obscurity from 1971, originally released in a tiny run on the custom SRT label. Collusion was a Dagenham-based six piece with twin guitars and interwoven male/female vocals as the main ingredients. Expect hard-edged prog-rock with tasty folk and jazz elements. This engaging CD features seven original tracks with the stunning 'Bluebirds' and the epic 'Sweetbread Line' as the undisputed highlights. The CD is presented with a special poster sleeve offering rare pics and memorabilia. There also are extensive sleeve notes and a band history by singer Tony Davison, plus an additional comment by their manager and esteemed promoter Darrol Edwards."
Posted by Purple Peak Records at 4:11 PM