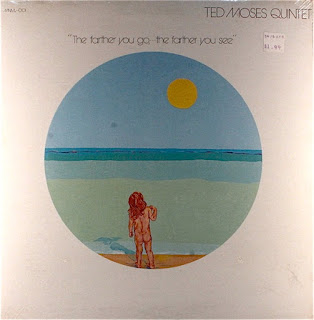 After 3 albums of crazy early 70s Japanese psychedelic cover tunes, I was looking for a bit of normalcy, and as luck would have it, Ted Moses Quintet was appended to Sound Creation's Rock Fantasia. Ah.... instrumental fusion. Wholesome fusion at that.

The AC says: "Sandwiched in between his electric modal/jazz-rock classic "Sidereal Time" and appearance on Ken Ramm's well-regarded "Dragon", Canadian pianist/keyboardist Moses and his group released this relatively unknown fusion platter. Although his piano/keyboards are definitely in the classic Chick Corea mold, the prominent use of trumpet and mixture of energetic funky fusion with more somber, haunting themes is somewhat reminiscent of Eddie Henderson's mid 70s work. Comes in a nice gatefold with some weird psychedelic artwork inside."

Those Chick Corea styled keyboards really dominate here.This is Fusion 101, so if you're a fan of the genre, then this is right in the middle of the railroad track. I'd prefer a bit more dirt and edge, though coming off Rock Fantasia, I have to admit this did sound pleasing to the ears.

As noted above, Ted Moses recorded a highly regarded jazz album from 1974 that is also without a CD reissue, though it would appear that title falls outside the boundaries of our blog. As well, we featured Ken Ramm years ago.

Priority: none
Posted by Purple Peak Records at 7:42 AM