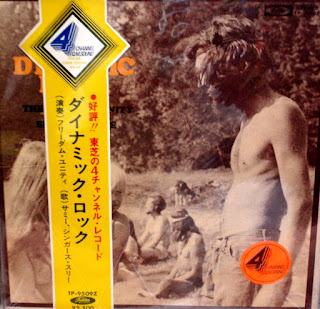 As fortune would have it, I had appended this album to Sound Creation's "Progressive Rock" (see yesterday's feature), thus unwittingly subjugating myself to nearly an hour and a half of early 1970s Japanese psychedelic cover tunes. Woo! That was some experience I tell ya.

The AC defines this one as: "This one's been a hit for years in the Japanese DJ scene, but just now seems to be gaining some notice in the outside world. It's your typical pop hits cover album of the time, but the frenzied execution and stylistic focus elevates it above the norm. Most of the covers are of the then popular horn rock variety (Chicago, BS&T, Traffic) with a few schmaltzy numbers thrown in that drag things down a bit. But when they let it rip, watch out! The husky-voiced Sammy belts it out over a turbo-charged horn rock attack, complete with crazed fuzz bass and Kimio Mizutani's patented ripping psych solos. Not an immortal masterwork by any means, but still a lot of fun."

I found the Chicago covers '25 or 6 to 4' and 'Free' to be the highlights here, with tight horn charts and Mizutani doing his best rendition of Terry Kath. On the other hand, the opening track is Creedence Clearwater Revival's 'Proud Mary'. Oh you haven't lived until you've heard 'Lorrin.... Lorrin.... Lorrin on a Liver'.

As the AC accurately states, the album is fun - perhaps fun-ny at times - and worth at least one listen.

Priority: none
Posted by Purple Peak Records at 7:54 AM