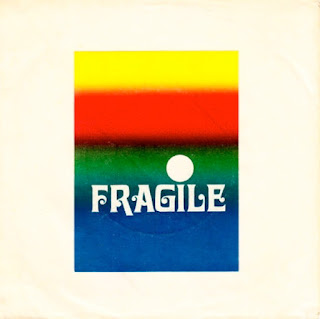 Great - another band named Fragile. Like Touch, Time, and Drama, it's a moniker that has been heavily used, and hard to research.

In any case, we have another serious rarity here provided by The AC. Technically this is a 7" single, but it's 33 RPM, and the length of an EP. The AC tells us: "Extremely obscure EP (just over 15 minutes) of what I would feel comfortable labeling as "heavy prog", a genre description that I usually find to be overly vague. However, in this case it really fits. Swirling wall-of-sound organ collides with heavy, crashing guitars over a fat, thumping rhythm section. It's from that netherworld where progressive rock, psychedelia and hard-rock/proto-metal had a meeting of the minds before heading off in their own directions. The vocals are fitting and more than decent, but most of the space is given over to heavy riffing and instrumental jamming. The vast majority of new discoveries that come out of Germany are from the seemingly bottomless (some would say tiresomely so, at this point) well of the late 70s/early 80s private press boom, so it's refreshing to occasionally be reminded that the deeper waters of the original prog/krautrock scene have not yet completely run dry. This is excellent stuff that I believe would have a wide appeal, so hopefully one of the German reissue/archival labels will track these guys down and find some additional tapes of similar quality sitting quietly in one of their attics, just waiting to be dusted off."

I also found the music highly appealing. Very much the sound of Germany during 1974, but with an added complexity moving it more towards progressive rock and less the traditional hard Krautrock sound. Probably tracks closest to the obscure band Metropolis or even a bit like the archival Spektakel I suppose. This is just the type of band that Garden of Delights has been so successful in mining, and perhaps they will find a canister of great music for a full archival CD. Or at the very least, this will find its way onto one of their famous compilations. Great stuff.

Priority: 2
Posted by Purple Peak Records at 7:23 AM