News: Group 1850's Polyandri to be reissued on LP by Pseudonym 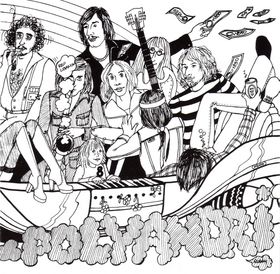 Yea. LP. Pseudonym continues the disturbing trend of reissuing albums on LP without the CD (grumpy morning for the CDRWL Tom?). Ugh. At least throw a factory pressed CD in there similar to Twink, Isaiah, Klockwerk Orange, etc...! So like Kvartetten Som Sprangde, Resan (both on Subliminal Sounds), and Mad Curry (Wah Wah), we have another high priority album being ignored for the CD market. That should keep the pirates active at least (GREAT!). Look, if you follow the UMR, you guys all know I love LPs. I collect them to this day, and I will likely buy this just to hear what they do with the sound, and to see the liner notes. I have the original LP as well, and at this point in my life, multiple copies of one album are OK with me. But it sure would be nice to get a legit CD too (I still have the absolutely awful Twilight Tone boot that comes from a scratchy record). Maybe they will follow through with the CD at a later date. We certainly hope so.

Label advertises: "At last reissued on LP (180-GRAM AUDIOPHILE VINYL!), it's the third and final studio album from Holland's ultimate psych legends GROUP 1850! 'Polyandri' was originally issued in 1974, when psychedelic rock had already lost its momentum. That unfortunate timing must be the only reason why this is a somewhat overlooked album, because the music itself is absolutely killer! On offer is a wild fusion of psychedelia, jazz-rock and progressive space rock, at many times dominated by band leader Peter Sjardin's home-built keyboard, The Organizer. There are guest appearances from Barry Hay (Golden Earrings) on flute and well known jazz musician Hans Dulfer on sax. The LP comes with remastered sound, a heavy gatefold sleeve boasting restored artwork, rare memorabilia, pix and liner notes by Mike Stax (Ugly Things)."
Posted by Purple Peak Records at 9:42 AM