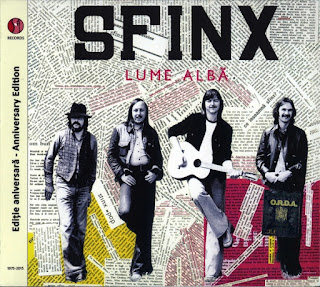 Here's the other news item from Achim. This is one of those albums I thought may have been reissued in the past, but no, this is the first legit CD for the album. And it comes from the superb indigenous Soft Records label. As an aside, I have a few of their CDs here to review for Under the Radar, and we have a couple there already (Survolaj, Talitha Qumi) that we've raved about in the past.

I haven't heard this album in ages. I don't even have a copy here, so I'll need to dig around for one. I see I have a rating for it, but I've just removed those as it's been way too long to be fair.

Our RYM friend Apps79 says this about it: "Sfinx came in life in Bucharest around 1963, found by three high school students and friends, drummer Cristian Valica, bassist Corneliu "Bibi" Ionescu and singer/guitarist Octav Zemlicka.Among their early members was also organist Idu Barbu, but the crucial point comes in 1967, when violin player and student Dan Andrei Aldea joined the band, he was destined to become the band's leader and an accomplished multi-instrumentalist.Several members would come and go over the span of the next 7-8 years, Sfinx'es fame though was on the rise, writing music for the film ''Nunta de piatra'' and releasing a first single in 1972.A second EP follows in 1974 at a time, when Ionescu and Aldea were surrounded by ex-Mondial drummer Mihai Cernea and a second guitarist, Dan Badulescu.Their ex-keyboardist Idu Barbu helped them during the recording sessions of their debut ''Lume alba'', which was released in 1975 on the Electrecord label.

You shouldn't expect by a band from Romania, a country with limited tradition in Progressive Rock, to break new grounds, but Sfinx appeared to be more than just a talented band on ''Lume alba'', exploring music fields that were almost forbidden for other groups.They played a mix of straight Hard Rock with some supporting poppy tunes, but I also encounter lots of folky influences and spacey, Fusion touches in their sound.The standard-structured tracks are rather of limited interest for fans with no access to the Romanian language, containing lots of punchy guitars, catchy choruses and dynamic grooves, which are sometimes surrounded by discreet keyboard sounds.But there are also tracks in here that are surprisingly good and beyond their time regarding the Romanian Rock scene.For example ''Sinteza'' is powered by great electric solos and a marching rhythm section, accompanying some impressive Moog synth solos with a slight spacey underline or the title-track, which sounds extremely trippy with its wordless vocals, background bass lines and soaring synth lines.''Muntele'' is very interesting as well, some of the guitar parts recall KING CRIMSON at their mid-period, the Hard Rock leads are still in evidence, but the semi-symphonic synths, the powerful breaks and the changing climates add a personal aura in this piece.''Calatorul si copacul'', the opening track is a nice attempt in Folk/Pop with great violin work by Aldea, while the swansong of the album, ''Om bun'', is a beautiful piece of archaic Prog Folk with a slight Medieval atmosphere, featuring poetic voices, traditional flute lines and light bass work.

That's what should be called Art Rock.Not groundbreaking by any means, however ''Lume alba'' remains a hidden gem of versatile Eastern-European Rock music with multilpe influences, likely to satisfy all lovers of flexible listenings.Recommended."
Posted by Purple Peak Records at 11:12 AM