News: Rigoni / Schoenherz reissued by Made in Germany 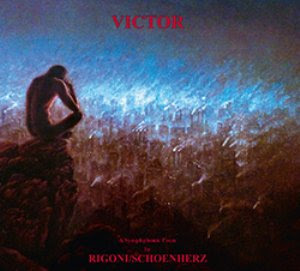 Made in Germany appears to be the successor to the InsideOut.de reissue series that started last decade. They're slowly adding more and more interesting titles. Last year they surprised us with the 3 CD set by Niagara. Now we learn that MiG is reissuing the epic double LP by Rigoni / Schoenherz. This is not the first time for the album to find itself on CD, as it was reissued by the parent label Bacillus in the late 1980s, but it's been OOP forever. To be perfectly honest, I never cared for this Austrian album much personally. But I know many of you will be pleased to see this.

Label says: "Before Richard Schönherz became famous as creator of the "Rilke" - and "Hesse" projects, in 1975 he created - along with Manuel Rigoni - the concept work "Victor".

"Victor" is still considered a milestone of prog-rock, a concept album that creates the balance between orchestrated classic and sophisticated rock in a unique way.

With the Royal Philharmonic Orchestra, the Vienna Academy Chamber Choir, musicians such as the recently deceased Kurt Hauenstein (Supermax), Harry Stojka, Achim Buchstab or Johan Daansers, "Victor" became a cinematic masterpiece about the power of youth and a plea for deference to authority, war and cruelty.

Partly recorded and mixed in the legendary Abbey Road Studios, "Victor" still is a timeless work that is worth exploring.

The MIG-new edition contains the complete, extensive booklet of the vinyl edition and has been lovingly remastered.

Cover Art by Karl Strnad
Photographs by Kurt Waldert and Karl Strnad "
Posted by Purple Peak Records at 7:36 AM

Richard Schoenherz went on to record a half way decent prog/ pop album in 1978 called 'What A Night'. The same line-up that recorded that album went on to become Einstein-releasing one record 'First Principles' in 1979. Peter Hauke produced and a very American sounding Kansas/ Styx styled LP.