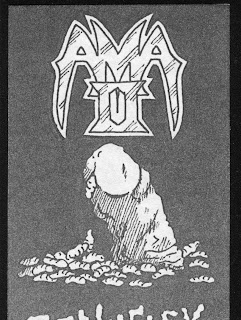 I was very lucky to live the festival scene from the insides, as I was living in Belgium at the times. Most of these musicians came from the 2nd wave of the british punk scene, thus the primitive, raw sound. AMA, RANCID POULTRY, GIANT EYES, TECHNO PAGAN, OMNIA OPERA had one leg in the punk/squat/peace convoy scene. On 1985-1986 Stonehenge was full of punks, bikers, crusties and new age travellers. SMART PILLS had Richard Chadwick on drums (went on to HAWKWIND). Bridget Wishart sang for three punk bands, the most famous being the HIPPY SLAGS. DEMENTED STOATS were a unique tribal psychedelic acid punk. The crossover of styles, space rock to punk agression to NWOBHM rhythms to hippy acid jams, all blended through the DIY ethos of the era worked miracles.

Thanks Spyros for the cool inside info. You were lucky to be a witness to that scene! I don't know most of those bands. Omnia Opera of course (and a post is coming soon, though I was hoping the CD reissues would have come out by now). And I have a pile of Rancid Poultry CD-R's to go through - I have the original cassette of "Controlled Exposure" and that's all I've heard by them to date.

For me, one of the most interesting bands of that scene (as uniqueness is concerned) were GIANT EYES from Brighton, England. A surreal mixture of GONG, RESIDENTS, post punk, horror movies... Too bad they never made it past two cassette releases ("Tales of Weirdo Hicks" pts 1 & 2). I found by chance an extract from those tapes uploaded here:

PS. Their drummer Nimbus ended up in CRAWLSPACE.