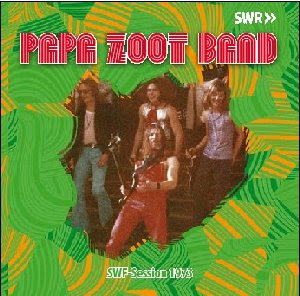 Label says: "Great lost band from Frankfurt, Germany. In 1973/ 1974 Papa Zoot Band played all over Germany, mainly in clubs but also on festivals (German Pop Meeting) 1st and 2nd February 1974 in Essen, Grugahalle. Titles 01 - 04 were recorded live at SWF-Studio U1 in Baden Baden on April 13, 1973. The titles 05 - 10 were recorded at "Bunker", the bands rehearsal room in Frankfurt. The band played a very melodic sound but with a sense of drama comparable to Nektar, Eloy or Jane. Outstanding 20 minutes titles "Fly away" could be a long track by Pink Floyd of the Meddle/ Wish you were here/ Animals-Era. Characteristic for the bands sound are especially the swirling organ sound played by Ex-Nosferatu organ-player Tammy Grohe. These recordings show Papa Zoot Band during there best period. Hard to believe, that there was no record company to give them a contract. The sound of the CD is brilliant. All titles were remastered from the original master tapes. CD comes with comprehensive booklet and rare photos. Secret tip! A must have for all lovers of the genre."
Posted by Purple Peak Records at 7:38 AM