News: Fireballet reissues to obtain release in the US on Inner Knot 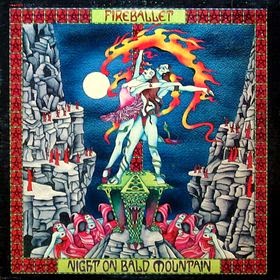 Much more information has surfaced regarding the reissues of Fireballet since we last reported on it. Thanks to a note from TheH this morning, and a further discussion with Laser Ken, we have learned that the Fireballet albums will be coming out in the US in September on the King Crimson specialist label Inner Knot. And, as it turns out, band member Jim Cuomo's wife runs Inner Knot, so now it's all making sense. As far as production goes, it was remastered by Larry Fast, so it should sound fantastic.

The official blurb on Facebook says: "We here at Inner Knot are proud & excited to announce the long awaited release dates for Fireballet's "Night On Bald Mountain"… newly remastered by Larry Fast… August 25th for Japan & Sept 16th in the USA… stay tuned for info on when to pre-order!"

We also have learned that the band was unsatisfied with the "Two, Too" cover (if I said that was understandable, it would be a gross understatement I think), and so expect new artwork for that as well.
Posted by Purple Peak Records at 3:28 PM