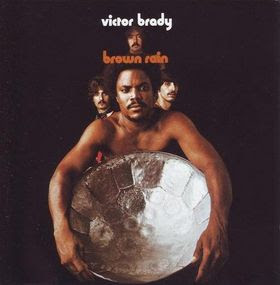 In doing research for this site, I sure do run across some weirdo albums, and this has to rank amongst the top tier for that. At its core, New York City based Brady, an African-American, has created a seriously heavy psych album, with non stop fuzz and plenty of ranting ala Frankie Dymon or Gil Scott-Heron. Some of the material is more pop oriented, but still maintains the heavy fuzz throughout. But we haven't got to the weird part yet. The lead instrument? Caribbean steel drums! Unfortunately after awhile, it all starts to sound more like a gimmick rather than as accompaniment. Perhaps it's the association of the instrument with island vacations, but it doesn't give off the right feeling when compared with the rest of the instrumentation and atmosphere. I mean, I wouldn't want to hear someone wailing on harmonica through a similar set of tunes either. In any case, quite a find and definitely recommended. Take it in small doses though. Victor Brady apparently was associated with the "Sound of Central Park" and, according to their website: "Victor Brady went on to cut a record deal with Polydor Records and released the album “Brown Rain”. Victor subsequently released a classical album called “Classical Soul” and later appeared in Las Vegas with Charo, on PBS’s Sesame Street, wrote a book about the steel drum, and performed and lectured at the Smithsonian Institute". Sounds like a true Renaissance man! Bootlegs exist.

Priority: none
Posted by Purple Peak Records at 8:34 AM