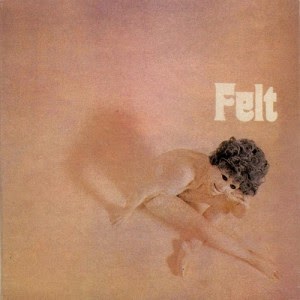 This entry comes as a result of the ongoing CD-R revisit project. I didn't feature it prior, since there exists a CD from a decade ago on the always gray area Akarma label of Italy. This one, like most of their US based releases, seems to be lacking in corroborating data as to the legitimate source. Rather than question the legality, we at the very least, are calling for a higher quality reissue.

Felt, from Northern Alabama, reminds me quite a bit of another band from the same region: After All (Tallahassee, Florida). Since Felt is two years on, the music has moved to a harder, bluesier rock sound. And so it's not quite as psychedelic and jazzy as After All, perhaps to its detriment. But tracks like 'Now She's Gone' and 'Destination' could have easily fit on the aforementioned album. Hammond organ and guitar are the main lead instruments here, along with the soulful bluesy vocals. Solid album from America's southeast region - an area not as well known for progressive music, and yet many bands did give it a whirl back in the day (and a few of those were on the same Nashville based Nasco Records). And most of those albums are well under the radar.

Please note our good friend Spacefreak's comment regarding an LP reissue: "(Felt has been) officially reissued in vinyl by the Greek Anazitisi label in 2012. A deluxe 180 gr vinyl + extensive 4 pages liner notes and containing a 7 inch with new tracks by FELT, on a more typical prog vein."
Posted by Purple Peak Records at 7:58 AM