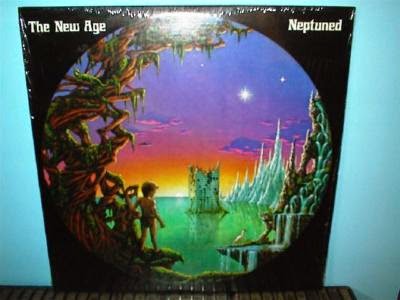 I first found this LP in 1996 at Bananas Record Warehouse in St. Petersburg, Florida. I was in Tampa for some Oracle DBA training (this was back when I actually had applicable skills), and of course didn't miss the opportunity for a little record shopping while I was there. Brought home a nice stack of LPs from that venture (the record store is still active!), of which The New Age (from Atlanta) was a part of. I also hung out with my buddy, newspaper columnist Richard P (still there man?), who was kind enough to show me the Tampa beach music scene one evening.

I thought the record was good - perhaps not great - and my old buddy Heavyrock was dying for a copy at that time. So I dubbed it to cassette, sold him the record, and then off it went to the mists of time. That cassette eventually became a CD-R, and here we are doing the CD-R revisit project, and up comes The New Age. I said to myself that I should just go ahead and get the CD - it's a good progressive rock record. Worth owning.

Then I realized there was a problem with that statement. In 2007, I had announced on the original CDRWL (from my old thomashayes.com site) that The New Age is now on CD, and it goes under the name Jordan Oliver (he apparently wasn't fond of Larry Oliver or The New Age anymore). You could go to CD Baby and obtain a copy. Problem solved.

Ah... CD Baby. I really like the website, and I think they're very good business folks, with excellent customer service skills. But they do one thing that drives me nuts....

.... they do not distinguish between CD's and CD-R's. Even now, you can go to the site and they list it as a CD. Now I don't own a copy, but everywhere else, it's listed as a CD-R - and I just confirmed with an industry friend that it is indeed a CD-R.

Is that such a big deal? I don't know if it's a big one, but it's a deal breaker for me. CD-R's are an inferior product. You can burn them on your laptop, and while most hold up, I've thrown plenty of them away as they stopped playing. Not all CD-R's will run in the various systems out there. I've never had to throw a factory pressed CD away, even ones that are "bronzed" from the 1980s. They still work - and play everywhere.

If these things don't matter to you, then by all means grab the CD-R. It's 100% legit and was released personally by Jordan Oliver.

But as we state in the FAQ, albums stay in the CDRWL until they receive an actual CD. CD-R's do not count. So we're calling for a more professional reissue.

The New Age is not the only album in this state, and there are a few more I'll be adding back in as I go. Some through the collection project and other via this CD-R revisit project.

Oh.... The music on The New Age is a decent classically inspired keyboard symphonic progressive rock work. A sound very much out of vogue for 1980 - similar to 1970 era ELP and, more to the point, The Nice.