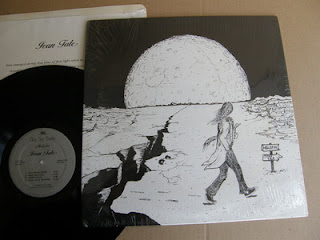 And yet another Midwest Mike submission from the past that came up during the CD-R revisit project. Definitely on the margins of what we cover here, but a good listen nonetheless.

Melofin's sole album from 1984 is a slow moving, slice-of-life, psychedelic folk album that sounds about 15 years past its expiration date. Mostly vocal driven acoustic music, with occasional electric guitar leads, winds, and synthesizer. Melofin hail from Morgantown, West Virginia and makes one wonder if perhaps the 60s psych movement had just found its way into the Allegheny mountains. Somewhere between old-timey mountain music, Celtic jigs, and CSN&Y singalongs. Recalls some of the low budget English 99-album-count folk albums from 1969/70. About as anachronistic as they come. All the same, worth a few listens for certain. And it features an awesome album cover, which unfortunately does not represent the contents within.

Priority: none
Posted by Purple Peak Records at 9:53 AM

The band reformed in the late 90's and released a CD of basic blues rock. I was in touch with the guitarist at one point, masters for the LP still exist apparently although that was 18 years ago, so....