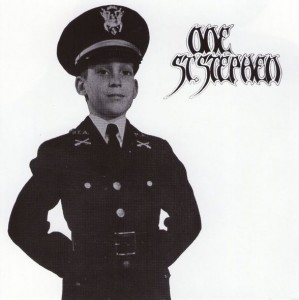 In the late 90s, I bought a large collection of CDs and LPs. One of those CDs was One St. Stephen's sole album. But it's an obvious pirate, and unfortunately that's all there is in regards to a CD. There is, however, a legitimate LP reissue. And the artist is very happy with the final product.

The gentleman behind One St. Stephen is Don Patterson, who seems like quite the Renaissance Man. There is a tremendous amount of data about him in the webosphere. I highly recommend the It's Psychedelic Baby interview as the first place to start your research.

Musically the album is influenced by Jim Morrison and The Doors, and is a very anachronistic sound for 1975. Perhaps similar to Phantom's Divine Comedy in that way. I should note that the idea that One St. Stephen sounds like The Doors is hotly contested in some quarters. OK, then...