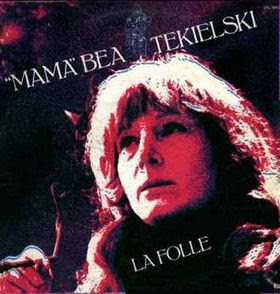 Mama Bea's debut album is clearly indebted to Catherine Ribeiro & Alpes' early 1970s works, but honestly this is much more dense, and truth be told, completely unhinged. Perhaps it's Ribeiro's Portuguese heritage verse Tekielski's Polish background, but there's something far more disturbing going on with "La Folle" than anything Ribeiro coughed up (literally). While Ribeiro is far from an easy listen, she still comes across as the mysterious troubled damsel in distress. Perhaps it's her runway-fashion-model looks, but Catherine seems to be reaching out for help while still dominating all that is around her. With Mama Bea, she delivers 100 ragged nights of booze, pills and rock and roll. She has both the look and the attitude. The cover of her smoking a cigarette, with a face that says that she's had just about enough of this crap, is priceless. And so she takes out her frustrations on this recording. There are times when it would seem more appropriate that the medics come in and hustle her off to safer pastures. Meanwhile all the earmarks of a classic underground album are going on in the background, with plenty of psychedelic guitar, rumbling bass (a trademark of the French scene) and pounding percussion. It's all a bit unsettling, but it's also too real to ignore. A real grower if I ever heard one.

Priority: none
Posted by Purple Peak Records at 7:40 AM

Back in Purple said...