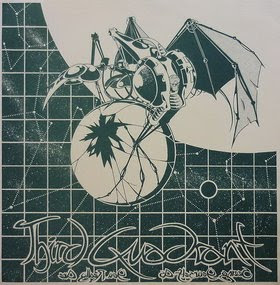 Third Quadrant - Seeing Yourself As You Really Are. 1982 Rock Cottage.

Released a few months prior to the New Wave of Progressive Rock movement (aka Neo Prog), Third Quadrant's debut album arrived just a tad early to receive the press and distribution it needed to survive. It's considered one of the major rarities from the era, along with the Airship label groups like Protos and Gemini. Musically it's fairly under produced, but does possess a strong mid 70's Genesis to late 70's Pink Floyd feel. Mellow Records reissued a later album "Layered" over 15 years ago, but never did tackle this one. Not essential, but nice to have from an historical perspective. I've read from the band's bass player that there are 2 albums prior to this one, but not sure if they were on LP, cassette or just on their own personal reel to reels.

Priority: none
Posted by Purple Peak Records at 7:08 AM