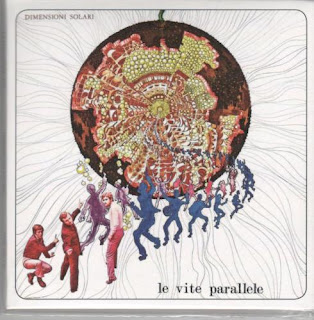 BTF has a few exciting looking items on the horizon (including a new album by Nuova Era, one of my favorite Italian bands of the late 80s and early 90s).

This one looks to be an embryonic work, and a missing link as it were from the Italian beat scene to the progressive one. Unlike in the US or England, the Italian progressive rock scene just seemed to "wake up" one day, and there it was. No doubt there were other bands / recordings like this one (going off the notes below of course). Looks like a great discovery! Also, really interesting story about the first Formula 3 album cover (one of the all-time great covers on an otherwise mundane beat styled album).

"Le Vite Parallele are a sensational discovery, since we are dealing with a concept album, recorded in Milan between 1969 and 1970 and never published until now!
Formed by singer Enzo Maolucci and recorded in the famous "Basilica" of Mina, arranged by Nando De Luca (the one of "Azzurro"!) and nearly released by Sandro Colombini, boss of the famous "Numero Uno " label, this work is also remarkable for the wonderful cover made by Tullio Rolandi: when Alberto Radius saw the sketches, he immediately contacted him, and that is how the artwork of the famous "Dies Irae" of Formula Tre was created.
This record is a remarkable document because it comes in a moment in time when Italian prog records could be counted on the fingers of one hand. Even more surprising that it is a concept album! Musically it is strongly focused on melodies, with relatively short tracks, but baroque arrangements and a use of keyboards that predicts the symphonic prog scene, that would be developed shortly thereafter by the big ones.
So this is a fundamental step to understand evolution of Italian prog in its beginnings and it is still unbelievable how such a fundamental piece of work has been left in oblivion for all these years.
Limited edition of 500 copies, deluxe papersleeve containing a large poster showing the history of the band and all the wonderful graphic sketches made in 1970.