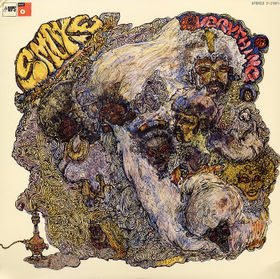 Smoke - Everything. 1973 MPS. Released only in Germany.

Here's another one that found its way to my door recently. We haven't focused much on the early 70s jazz / jazz-rock here, but I thought this one crossed the line nicely to our interest area.

"Everything" is a varied, but super cool atmospheric jazz rock album. Freaky in the MPS tradition, though group is California based (rather than German as is often thought). The bass clarinet piece recalls Lard Free on I'm Around Midnight. Speaking of which, lots of great midnight lounge organ sounds. No other album like this one. A kozmigroov classic.

Since this one is on MPS, we can only hope that it ultimately gets reissued with the others from the label (the current reissue series goes in fits and starts).

They have another album from 1970 that I understand to be different (more jazz influenced), though I haven't heard it.

Priority: 3
Posted by Purple Peak Records at 7:32 AM

I've heard the first eponymous album on MPS-BASF (SES 1203), and it is just as great as "Everything", which was recorded in 71, but released in 73, I've been told. There is a 3rd LP by this group led by Woody Webb, which was released in The States later, but it contains material from both German albums, if memory serves. Cheers, the Lolly Pope

Are you the same Lolly Pope that runs a shop that specializes in Eastern European psychedelic music?

no, I'm the Lolly Pope who co-runs the (german) blog spurensicherung.blogspot.com (aka roots&traces) and the one who compiled the va-cd-series of rare Kraut-45s that started with "Kraut,Demons,Kraut" (Hungry Krauts,Daddy -Obscured By Krauts - Kraut Bloody Rageous etc.)On the blog you can find 3 more of these comps which are online-only, never went to the pressing plant and never hit the shops. Lot of other rare stuff that might be up your alley, too..

Ah, OK got it. Cool blog! Thanks for your comments!