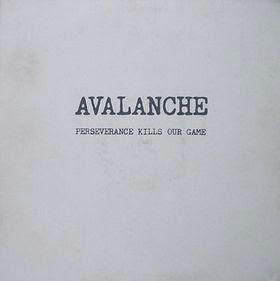 It's Christmas Eve. It was already a festive evening, and I was off to bed... when I saw a little blurb come across the computer. NO WAY! Years and years and years of hoping this one would come out, but the band had always resisted. And now, it is official. I even bought an original LP at top market prices presuming it never would get a reissue. I suppose at this point, I probably never will sell that LP, but I can't wait to get this one on CD (and for vinyl heads, it is also getting pressed on wax).

Guerssen says: "Absolute masterpiece when talking about progressive / psychedelic folk-rock from Europe. Dutch band Avalanche was formed in the early 70s and recorded their only album in 1979. “Perseverance kills our game” was released as a private edition of 500 copies, which were only distributed among friends and relatives. Despite being a home-made project (the album was recorded in just one day!) the result was stunning. Totally early 70s sounding electric folk-rock with flute, piano, bass, drums, and killer fuzz guitar. Mostly instrumental with a few vocals in English. It alternates delicate acoustic passages with devastating fuzz leads, sounding like Fairport Convention jamming with early Ash Ra Tempel. The album closes with an extended 11 minute track on which guitar player Daan Slaman starts playing leads like a madman, creating layers and layers of liquid acid-fuzz guitar. It has to be heard to be believed! First ever LP / CD reissue, done in cooperation with the original band members. Insert / booklet with rare photos and liner notes by Richard Allen. Carefully remastered from original vinyl (the masters were destroyed long ago) using state-of-the-art equipment, resulting in stunning sound quality."

This was one of our Priority 1's... Perhaps the best Christmas present for many of us, eh? :-)
Posted by Purple Peak Records at 10:56 PM

WOW! Great news!!! I also doubt I will sell my LP