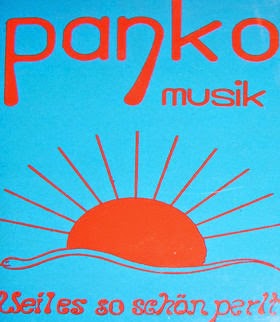 Whew! A bit of relief here. It seemed Germany's best reissue label had disappeared into the ether without notice. This is the first we've heard from them since 2013. We had first announced that the Panko album had been added to their "Coming Soon" list back in Sept of 2012. So this is welcome news - and Panko is something I'm most interested in hearing what they will do with it. I just have a cassette dub (like everyone else I presume), and sonically it's pretty rough. Hopefully we'll see an improvement like we did with the Cosmic Circus tape. The music is outstanding, as would be expected from 1971 Germany. See below for label's description.

In addition to the Panko announcement, they are wrapping up their commitment to reissue Virus' "Thoughts" on CD as well. This will include the two bonus tracks that were also on the Long Hair LP reissue from last year. They're very short, so not worth getting for that alone, but I wouldn't mind upgrading my old Bernhard Mikulski CD from 23 years ago, and checking out their history section (which was also a nice addition to the LH LP).

GoD is also continuing to reissue their back catalog on LP, and they have a few titles selected. One curious one is the first Eela Craig, which they did in conjunction with Amber Soundroom about 10 years ago. I bought that one immediately, and it looked like a great investment, but it appears it may lose its value now with the new reissue (except for those that collect Amber Soundroom reissues I guess....). Oh well, I'm not selling mine in any case.

Still no word on the Missus Beastly "Space Guerillas" and Sunbirds "Zagara" reissues that were imminent two years ago. Hopefully they're still on the docket. I would love to get CDs of both of those.

Here's GoD's description of the Panko album: "Panko from West Berlin (not to be confused with the much later East-German band Pankow) musically reminds of Xhol Caravan or the early Embryo. The band mostly played long jazzy instrumental pieces, dominated by flute and alto saxophone, at times interrupted by mainly English vocals and some follies. The band existed from the late sixties 'til the end of 1972. During its active career the group didn't release any material, although they definitely had much potential. In 1983 their drummer (at last) released the cassette 'Weil Es So Schön Perlt'. This tape featured live recordings of good sound quality, dating from June 1971. Now here's a great CD-edition of that tape, enriched with two bonus tracks."
Posted by Purple Peak Records at 4:40 PM