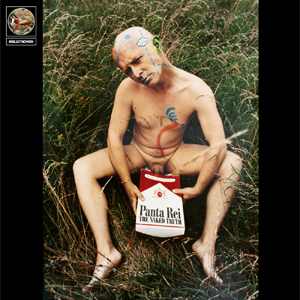 Somehow I missed this release (titled "The Naked Truth") from April. Or did I? All I can find is this album has been released on LP, and of course that's not the focus of this site. However, here is the original advert for it, as found on progg.se (with the help of Google Translate):

"New live album with the Uppsala group PANTA REI
Their psychedelic LP from 1973 is still one of the most sought after LPs from the 70s. Mellotronen has now published five songs recorded live in Kummelnäs of 1973 with a nice 8-page mini book of the same elegant style as Asoka, Sabu Martinez disks, etc. Some 100 unique pictures and lots of information including interviews.
______________
LP LTD. 500 copies!
Also available on CD"

So there it is - a CD. Not that I can find one for sale. Probably it will come along soon. Note the slight differences in the cover art to the original.

What is with this title anyway? There are so many reissues of the 1973 album, and still NOT ONE legitimate CD of the debut. There's a legit LP (Golden Pavilion) and a pile, and I mean a pile, of pirate CD editions. And now we get what looks like a very interesting archival release from the same era. So why not a legit CD version of the album to go with this? I'm just grateful to own the original LP.

Our original feature of the album is here.

Perhaps the best news out of this is that Mellotronen is still releasing archival albums!
Posted by Purple Peak Records at 9:50 AM No comments: