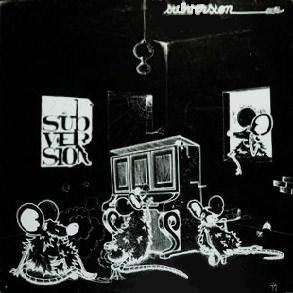 Certainly the most obscure album on Phillippe Besombes' Pole label. I hadn't even heard of it until recently (2008), and I think I'd heard every other Pole/Tapioca album by 1992! Featuring a crude black and white cover, it's exactly the sort of album you would expect to find on the FLVM label a few years later. This pre-Falstaff outfit mixed complex progressive rock in the Memoriance / Pulsar vein, along with jazz rock sections and some introspective folky moments. Not much cohesion, but they did well with each style they attempted. Very different from anything else on the label, except maybe Emergency Exit. And, like EE, Subversion was also not repressed by Tapioca later in the decade, adding to its obscurity.

Priority: 3
Posted by Purple Peak Records at 9:44 AM

Tom, how did you get to hear about it then in 2008?
Sounds interesting, particularly mentioning Pulsar and Memoriance.

A local friend in Ft.Worth. He has an amazing collection - far more than I could ever hope to have. He made me a CD-R copy from his LP.