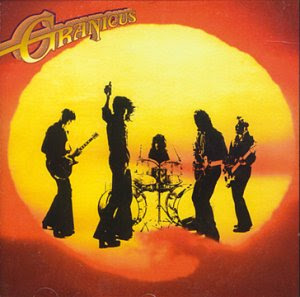 Like Polyphony, this album has been bootlegged so much on CD, it's completely understandable why most folks think this one is already out legit on CD. According to multiple sources, it was due for reissue in 2001, with bonus tracks, but the label (Rewind) went out of business before release. And it still remains in that state. Ugh.

Granicus are a Cleveland, OH based hard rock group. Probably the single best example from the US to attempt a Led Zeppelin like raucous electric blues sound. Has a Midwest America sensibility and directness as found in other bands from the region (Poobah for example), but otherwise Page and company is definitely the influence here. Mellotron and acoustic guitar touches combined with Robert Plant styled high pitched vocals puts this album somewhere between Zeppelin's "IV" and "Houses of the Holy". This is essential for hard rock fans, especially those who like a little adventurous progressive compositions mixed in.

This album has near legendary status for it's GRIT around here.

Where is the legit release? These are hard times for Granicus fans