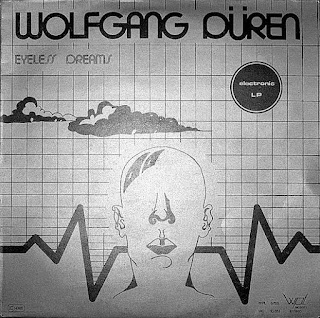 Back in the 1980s, there used to be a really cool store here in Dallas called The Record Gallery that stocked all sorts of European imports, with a strong slant towards the avant garde. Electronic music was one of the specialties of the owner (who now lives in Portland and still sells on ebay). It was here that I discovered bands like Ashra, Heldon and many others. Oh, and he sold original art paintings as well - thus the name of the store.

I remember seeing Wolfgang Düren's sole album back then, but there was just too much for me to still discover, and this one looked a bit synth-poppy to be honest. But it's nothing of the sort. Mike sent this along as he thought I'd enjoy it, and as usual he was right.

Eyeless Dreams is a solid entry for those into 1970s Berlin School sounds. Sequencers and synthesizer solos are the order of the day. Lots of Klaus Schulze, some Adelbert von Deyen and even a little Kraftwerk. Since I'm fond of the genre, this is an easy one for me to recommend.

(9/29/2012 update: I now own the original LP. As such, I've attached the correct cover which is silver - not white. As well, there isn't a date anywhere on the LP itself. It's generally attributed to 1980, however the only notes I could find on the internet is that it was recorded in the late 1970s. )
Posted by Purple Peak Records at 3:24 PM

Top pick! Time to get my vinyl out of retirement :)