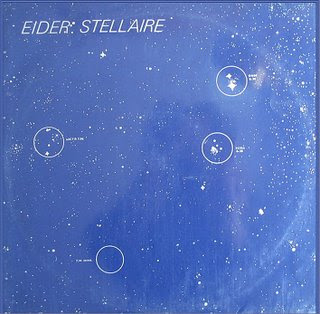 "EIDER STELLAIRE - EIDER STELLAIRE (CD/SOLEIL ZEUHL)Christian Vander's post-Magma band Eider Stellaire frequently functioned as the opening act for Magma's concerts in the late '70s and early '80s. This made perfect sense since both bands shared the same sources of inspiration, f.i. the European 20th century classical composers (Bartok, Stravinsky, Orff) and the energy of rock music. Also notable were the importance of the rhythm section and mysterious, wordless female vocals. Eider Stellaire's excellent self titled album from 1981 is still regarded as a masterpiece from the French progressive era and now it's reissued on CD, including a superb 10 minute alternate version of 'Nihil' as a bonus."
Posted by Purple Peak Records at 8:06 AM

It's seems that no-one carries it Tom...

It's not out yet. I should have made that clear in my note. I'll fix it now - thanks Spyros!

Thanks again Tom for more exciting news. Another one to look forward to :)

Good to hear from you Strawbsfan! Yes, very exciting indeed!