News: Major Surgery's "The First Cut" has just been reissued on CD! 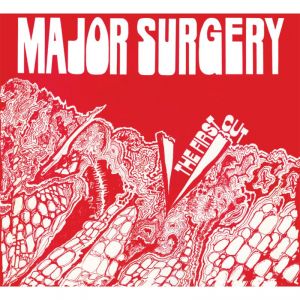 Here's one that came out of nowhere. Thanks to a note from reader Jon, we learned this morning that Proper Music has reissued the sole album by the UK jazz rock group Major Surgery. I was not familiar with Proper Music prior, but it seems they have quite a few reissues to date, mostly out of the scope of the CDRWL. In fact Major Surgery would seem like an odd choice for a label such as this. Good - better for us!

The label described the album as thus: "A fully remastered re-issue of the 1976 original vinyl release, which includes a previously unreleased track from the original recording session. The sound of the South London Jazz and hipster scene of the early 1970s transcending a time and place which can be found no more and is simultaneously timeless. True and raw music genius fronted by the "Tenor Titan" Don Weller, backed by Bruce Collcutt on bass guitar, Jimmy Roche on guitar and the late Tony Marsh on the drums. The CD release contains an 8 page booklet including liner notes and rare band photographs."

Our blog feature of the album is here. This was an AC discovery from last year.

Posted by Purple Peak Records at 7:25 AM

Just been looking at your album reviews and they are very well-written, your writing being of a standard we look for when identifying music bloggers to invite onboard as Reviewers at Alltime Records!

So I hope you don't mind me dropping by to let you know about our service, and invite you to check out the Alltime Records site as a way for your writing to reach a wider audience.

at last! i've been after a copy of "First Cut" for years! excellent reviews by the way.....your site is always a pleasure!

The label has put a video of the first track on youtube with some background info:
http://www.youtube.com/watch?v=TlrHBkdoQJk