News: Gringo to be reissued in September 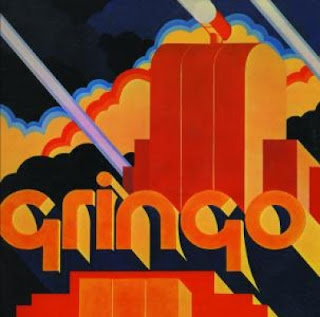 I sense summer is starting to close, as the announcements are starting to roll in again. I myself have a couple of weeks of summer vacation still to take, but it's obvious the Fall season is upon us.

Gonzo, a sub label of the same folks behind Voiceprint, will be reissuing Gringo for the first time. I never featured the album prior, as there was a fuzzy/gray reissue from Audio Archives long ago with little backup as to the source. I'm no legal expert, so I just stayed out of the discussion. Well now we have a bonafide legit reissue that you can buy with confidence!

Label says: "You may not have heard the name, but I am sure that if you are reading this you have heard his music. John G Perry is best known for his session work, most notably for Caravan on "For Girls Who Go Plump in the Night" and "Caravan and the New Symphonia," but he has performed with many other Prog and non-Prog artists. Although he was born in America, his parents were British and soon moved back to the UK, and as PERRY grew up, he became more interested in music. One of his first projects as a musician was called Gringo. Evolving from student beat groups, Utopia and Toast, in 60s Bath; Gringo also featured Henry Marsh who later sampled chart success with Sailor, and Simon Byrne worked with – of all people - Brotherhood of Man among others. Perry describes the early days of the band: It started out as Utopia, a five-piece copy band doing all the hits from the Beatles and the Searchers and lots of stuff playing at college and parties. Everybody in the band had been at private school and sung in the choir, so it was a terrific vocal band. We used to do wonderful renditions of Beach Boys songs, we were really rather good at that. It was basically the same band all the way through, the three of us : Henry Marsh on guitar and keyboards, Simon Byrne on drums and myself... That first band unfortunately split when everybody went their way. I went off to become a farming student, working on different dairy farms in the West country of England. But I kept in contact with Henry and Simon, and they approached me one day, saying they'd have a year off in their studies, and would I join them to form a new band, you know, rather than go grape-picking in France, which I thought would be wonderful... I actually had also decided to have a year off before I was going to go up to the Royal Agricultural College in Cirencester. So we elected to get this band together, which was called Toast. We hired one of the farmers' cottages, locked ourselves away and worked very hard, rehearsing or whatever, built up a repertoire and then we came up to London, and three months later we're on television! The show was 'Colour Me Pop' and we did three songs on that... So none of us went back to college, and we all carried on in a musical career. Gringo toured in Europe and even made a living with a club residency on the south coast of France. They were opening act on a UK tour featuring Barclay James Harvest and Caravan. Perry takes up the story: We were there a sort of opening act, and got to know both bands and kept in touch with them. It was a good tour actually, very successful, cause Caravan were very well-known in the South of England and BJH were very well-known in the North of England, so all the way round the country we had the crowds and stuff, so for us that was taking us out of the small clubs into concert halls and theaters and stuff like that, so that was a good experience for us. Their recorded legacy is a quality album of pop-tinged progressive rock that still sounds fresh, with a lightness of touch and many distinctive twists. The song-within-a-song piece, Emma And Harry, is worthy of note, but all nine tracks are good. It is tempting to wonder if “Land of Who Knows Where” may have been inspired by a certain Caravan album released the same year.