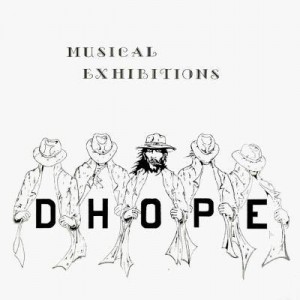 I think it's time to break in He Who Must Not Be Named (HWMNBN), and this constitutes his debut on the CDRWL (yea, we're pretty sure it's a he - so that narrows it down by exactly .00005%). There are few albums as mythical as Dhope, and it sits in the same league from a rarity perspective as albums such as Rhea and Lindwurm (What's that you say? Right, of course... the other Lindwurm). Garden of Delights has been promising to reissue this album since about... ...1981 was it? So I wouldn't hold my breath for an imminent CD from your favorite retailer.

One of the bigger controversies out there is the release date. Most websites have it as 1976. GoD says 1980 and I'm not likely to argue with them, as they do know their... (poop). As I listen to the album, 1980 seems far more plausible to me. More in the composition style than the instrumentation, which is definitely of an older stock. One does have to remember that the 3 number system of 197? will draw far more dollars than the one that goes like 198?, and so dealers are very aware of the impact to said bottom line. I checked with our resident Gnosis German expert Lev (no, Lev is not HWMNBN - nor is anyone on Gnosis - let me quell that right here) about the date. He has a full scan of the back cover, but there is no date anywhere. Actually there's a YouTube video out there with the second track, and the back cover is part of the video montage. Perhaps it's on the label of the LP itself - or in the runoff groove? We haven't seen one, so we don't know.

Musically, this one takes a bit to get going. The opening track, while a finely crafted piece, is somewhat straightforward, but with some fine Moog, and features that unique lower register German voice singing English. Perhaps not quite as dour as Paternoster (what is?), but that's too far off. Later on he sings in a higher register, which I found a bit more appealing. Now I'll be honest here, this album didn't floor me on the whole. Or maybe I should say it didn't really match the reviews I've read. There's no mellotron (as confirmed by a band member), and the time changes are more like theme shifts rather than metric gymnastics embedded within each measure. The compositions sort of bounce along harmlessly, with plenty of fat bass and 4/4 drumming, sometimes in a pseudo disco beat (like I said... 1980). There's some fine, though not exceptional, guitar soloing, and most of the keyboards are organ and Moog. And all of the above is fine for me honestly, as the music definitely fits the time and place. But... you will not be thinking this is the German album from 1973 Italy as perhaps the Tonic album does in places. However, if you like the late 70s German symphonic sound, and get a bit tired of all the Kraut Fusion from this era, then I think Dhope will certainly satisfy, and will be most welcomed on CD - especially as it's certain to sound better after GoD has cleaned it up.

Comparisons? Perhaps an amalgamation of all 3 Indigo albums, Fly, Novalis, Gloria's Children, Minotaurus, Shaa Khan, Anyone's Daughter, Waniyetula (Galaxy), and others of its ilk. Or a male vocal equivalent to Werwolf, Rebekka, and Eden. Consider me a first day buyer of the CD. Presuming I'm still alive in 2047....

Could find some info from the bands bass player and one of the guitarists.

Band was formed by students of the Paderborn University after lose sessions in 78/79.

Thanks for the info!