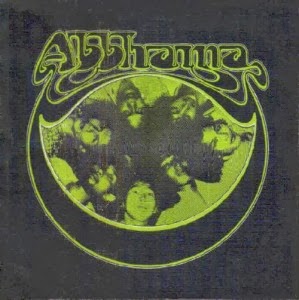 And speaking of albums I never got around to giving its own post, but have in the main list ("The Original CD Wish List"), here's one that I most assuredly would have eventually covered. And now I don't have to! Abbhama is an interesting album that mixes English Big 3 progressive rock with Asian pop music. I believe it was only issued as a cassette prior, similar to many Indonesian items from the 70s and 80s.

Here's the news announcement from Strawberry Rain: "One of the nice things about trading and collecting records is you meet people around the world.  One person I’ve dealt with for many years now, and developed a strong friendship with is AGUS from Jakarta, Indonesia.  Due to the amount of work we’ve both put in to the region, we’ve decided to combine forces to help bring the best products and licenses to both the World market, and Indonesian markets.  This will not only improve our overall output, but it will help the Indonesian market to get reissues in a more efficient manner.  Our first joint contract was finished today, and we’re proud to announce the upcoming release of the progressive rock “ABBHAMA BAND”, which we’ll release together on LP and CD for the first time ever!  This means both Strawberry Rain and Majemuk Records will be releasing “ABBHAMA BAND” on LP and CD in a joint venture, splitting the pressing across our regions respectfully.  I will also be supporting and helping to distribute all of Majemuk Records releases, and Majemuk will continue to support Strawberry Rain within the Indonesian region.  Look out for many projects from both labels, including Marcell Thee which is currently in production!"
Posted by Purple Peak Records at 3:22 PM

Good to see that in these downloading days there are still labels like Strawberry Rain who are taking the risk of releasing such total obscurities on CD. To be honest, most of their stuff is a bit too folky for my tastes, but I do enjoy Kelompok Kampungan a lot and this Abbhama Band looks very intriguing as well. I hope they'll have a few samples up on their site soon.

I agree, Bas, about the risk. Let's keep hoping labels like Strawberry Rain persevere. Definitely get the Leong Lau "Dragon Man" when it comes out!

And of course it's up to us fans to keep supporting them!

I second the recommendation of Kelompok Kampungan - really cool stuff.