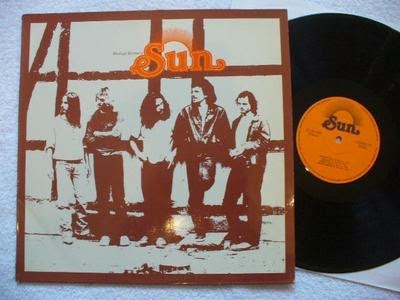 Following on yesterday's Atrium post, I thought I'd pull this one out of the main list - the archives as it were. It did come about via the CD-R revisit project. Like with Atrium, I received this from Midwest Mike - though he sent this one a few years ago, and I just didn't get a chance to give it its own feature.

Michael Borner is a lead guitarist and his band Sun is somewhat dominated by his playing. There's quite a bit of sax too, anything from Coltane-ish squeals to smooth jazz. You can also expect some punchy horns and orchestration too. The fusion on display here is fairly typical for the era - one that possesses a light, sunny, Caribbean influenced tropical sound. Jazz, funk, and yea, fuzak styles are all peppered in as it goes - along with a clear dose of fusion era Santana (and the guitar tones here carry a much needed psychedelic edge). I was reminded of the To Be album on the Brain label, as well as the Surgery album (that was recently reissued by Garden of Delights). A nice record, but nothing extraordinary.

This is a different band from the Sun that released one album in 1980 (and, like Surgery, was also reissued by Garden of Delights in recent years).