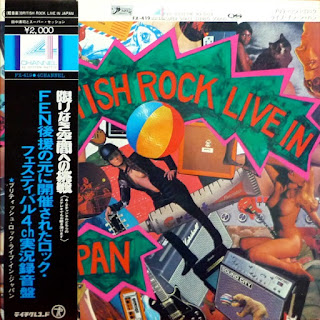 Leaving the original AC's notes here: "While drummer Tanaka is ostensibly the leader of this particular studio group, it's really just another incarnation of the Hoguchi/Mizutani gang heard on so many of these sessions. However, by this time they had lost their minds entirely and exited the studio having belched out one of the most insanely over the top instrumental psych/prog freakouts ever to defile the ears of man. This thing was touted to be a live concert of popular British/American psych/rock tunes by artists such as Pink Floyd and Jimi Hendrix. Except that it's absolutely none of the above. A little fake audience noise can't hide the fact that this is a (very well recorded) "live in the studio" jam session, and there's nary a hint of any cover material at all. Instead, we're assaulted with an amazingly long (almost a full hour!) instrumental blowout, divided into two continuously running side-long tracks. It all seems to be semi-improvised, driven by pummeling rhythms that sort of ebb and flow while the bass, guitar and organ converge and coalesce into one freaky jam after another. Even the most stoned-out-of-their-minds krautrockers would have been shocked by this level of depravity. This is so excessive in fact, that one might imagine modern Japanese psychonauts like Acid Mothers Temple having descended directly from this family tree. Except that they didn't, and this is about ten thousand times cooler. Needs a reissue ASAP, but I'm not sure these guys even remember recording it at this point..."
Posted by Purple Peak Records at 8:12 AM

Hi,Tom.
Thanks for the info of this album.
I correct his name .
His name is "Seiji Tanaka" ,not "Kiyoshi Tanaka "
Info about him.
http://www.studio-g3.com/whoswho/02-tanakaseiji.htm

Thanks Shige! Excellent info. I used Google translate to read.

It would be wonderful if some kind soul could share a rip of this online, if there is no known plan to reissue it yet. So many people would want to hear this! There are so many awesome gems from Japan yet to be reissued in any form (as for the rest of the world - anyone who still thinks "everything is on the internet" is just plain wrong!).
Likewise a share of the original unreleased Akira Ishikawa/Masahiko Satoh and friends 'Impressions of Africa: Uganda' (https://www.discogs.com/Masahiko-Satoh-Akira-Ishikawa-His-Count-Buffalos-The-Jazz-Rock-Band-Terumasa-Hino-Quartet-Toshiyuki-/release/7711773) would be so very much appreciated. It would be a kind of miracle if that one ever got reissued officially, and I know someone out there has a copy.

This has been reissued on CD now! I'm waiting for my copy to arrive, and hoping it hasn't been exaggerated too much in your review ;-)

Really? That's great news! I can say it's not exaggerated for myself, and I'm buying the CD immediately! :-) Time to do some research.