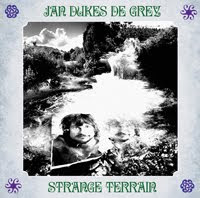 Well it goes to show that you never know what might turn up. Jan Dukes de Grey's "Mice and Rats in the Loft" is one of my Top 50 albums of all time, so I'm viewing this news with much interest. It's hard to tell exactly what the final result will be, but I'm most curious what they come up with. A different sounding project from 1976-1977 probably isn't going to sound anything like Mice and Rats, as it states below very clearly.

Label says: "Responsible for two of the strangest, most beguiling acid folk albums of the early 1970s, Jan Dukes de Grey have long been a legendary name on the prog/folk/psych collector circuit. When Cherry Tree reissued Sorcerers and the extraordinary Mice And Rats In The Loft on one handy double CD last year (to widespread acclaim, we might add), it seemed to be the final word on the band. However, during conversations with arch-Duke Derek Noy - the band's founder, guitarist, singer and songwriter - it transpired that Jan Dukes had actually gone on to record a third album, Strange Terrain, that had failed to appear at the time, largely due to the emergence of punk and the ensuing Collapse of Western Civilisation As We Know It. And here it is, complete with a handful of bonus tracks cut during the same timeframe (including the novelty single 'Standing In A Little 'Ole', issued under the band's punk-era pseudonym Rip Snorter). Recorded across 1976-77 under a production deal with Pink Floyd (Roger Waters produced and mixed two of the tracks), Strange Terrain reflects Derek Noy's desire to approach each album as a separate project rather than endlessly remake the same record. Dark, sombre and mysterious, Strange Terrain retains the boundless spirit of adventure and idiosyncratic approach to music-making that characterised their earlier albums, and is a vital addition to Jan Dukes de Grey's small but fascinating body of recorded work."