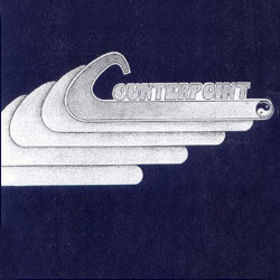 And this is the final album to report on from my last visit with Jeff. For the purposes of this site, Counterpoint would have to be considered a lesser album, but that's due to its more overt commercial nature. I suspect Counterpoint, like many bands coming of age in the late 70s and early 80s, were progressive rock enthusiasts who understood that the only way to any kind of success would require a pointed attempt at FM radio rock hits. All the usual suspects can be heard in Counterpoint's music such as Kansas, Styx, Saga (Canada), Journey, early 80's Santana, etc... There is some mighty fine organ, synth, and guitar work here, so not one to entirely overlook.

You can hear most of this album on their MySpace page.

And a full history is also provided on MySpace by the band.

There was quite a scene in Oklahoma during this period. In addition to Counterpoint, you had Cosmic Debris, Ojas, Astre and Totty to name but a few.

Priority: none
Posted by Purple Peak Records at 6:55 AM