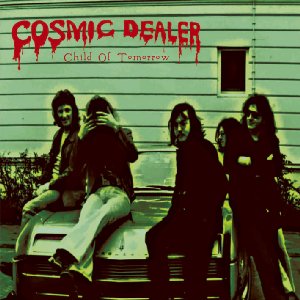 Here's a surprise announcement. The German label World in Sound can always be counted on to turn up some cool rarities and archival releases, and this certainly looks intriguing! I'll be the first to admit that the 1971 Cosmic Dealer album left me wanting, but I'm most curious how this one will turn out.

World in Sound states: "This is the second previously unreleased album by the Dutch psychedelic hard rock band Cosmic Dealer. Their first album "Crystallization" from 1971 is an outstanding and rare masterpiece for all psych collectors and for sure one of the best Euro-Underground rock albums of the 70s. In 1971 the band was shortly disband but found together in 1973 with a few line-up changes but kept the same musical intention: heavy psychedelic, progressive and guitar driven hard rock, with catchy song writing, a few US-Westcoast flashes but also extended instrumental jam excursions. This album contains 6 songs which were recorded in 1973, plus 3 demos from 1971 and as bonustracks there are 4 live cuts also from 1971 including the title track from their debut Crystallization. The CD with a total running time of 68 mins contains a 12 p. booklet with lots of photos and linernotes and is carefully re-mastered to catch the real spirit of the beautiful and intense music. Definitely a must-have piece for all 60s psych freaks!"
Posted by Purple Peak Records at 6:37 AM