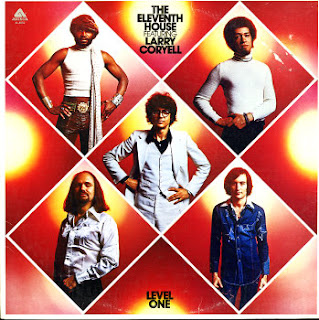 Following on the announcement of Lighthouse, I think most of you will be even more excited that the second Eleventh House album is finally coming out on CD. This album has alluded the digital treatment so far, whereas the first album has been released at least twice.

Label advertises: "Larry Coryell is best known as one of the original jazz-fusion guitarists of the 1970s. He is still making excellent albums to this day. He has issued solo albums, along with collaborations with John McLaughlin and other fusion-jazz luminaries. He also headed up the highly praised fusion group The Eleventh House. This group featured drummer Alphonse Mouzon and keyboardist Mike Mandel. One of the most requested fusion albums for CD reissue has been Level One. This album is now making its worldwide CD debut!"

Again we call on Dusty Groove to give their imitable review: "A really heavily-jamming album from Larry Coryell's Eleventh House group – certainly to be expected, given that the lineup includes John Lee on bass, Mike Mandel on keyboards, and Alphonse Mouzon on drums! The sound has plenty of rock-fusion touches – and Coryell's guitar is searing, but a bit more mainstream than before – certainly not slick, but just jamming like a range of other similar players from the same time. Titles include "Nyctaphobia", "That's The Joint", "Struttin With Sunshine", "The Other Side", and "Some Greasy Stuff"."
Posted by Purple Peak Records at 6:27 AM