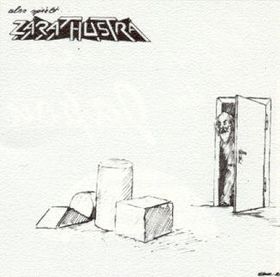 Here's Part 3 of our series. This one comes courtesy of our friend Tristan Stefan at Prog Not Frog, where you can also obtain a copy of the album for download.

Early on in my collecting career (say, 1985?), I was informed that the early 80s version of Zarathustra was a waste of time, and that the 1971 album by an unrelated band was the only Zarathustra worth seeking out. So when Second Battle reissued the Metronome 1971 album (in 1989), I was all over it, buying the LP re-release the minute it came out. I was happy with the purchase, as it was a decent representative of the Hammond organ rich German culture of the time. And I still own that LP, which I hope to review eventually on UMR.

23 years later, I finally heard the "inferior" 1982 band. Gotta an inside tip for all you out there: I like this one better. SORRY!

This Zarathustra absolutely nails the 80s neo-progressive meets 60s psychedelic sound. If you like the music of similar German bands like Neuschwanstein, Ivory and Sirius with the psychedelic acid guitar of Iskander (another underrated 80s group), then by all means seek this puppy out. Perhaps only the M.L. Bongers Project approaches this mix of Hawkwind meets Genesis. A really great find. Don't miss your chance to hear it, and hopefully a CD reissue label will take a chance on this one! It's a perfect fit for Sireena or Garden of Delights.

Tristan Stefan says about the music (he offers plenty of philosophical insights as well):"What we have here is a typical late-seventies / early eighties kraut hard rock private pressing, along the lines of Last Exit, Burning Candle, etc., or the previous Forest album. Some tracks are quite enjoyably hard with driving riffs, there is a lot of variety too, but hampering somewhat is the sound, which seems almost as if it was recorded on a two track mixer."

Priority: 2
Posted by Purple Peak Records at 8:25 AM

wow! priority 2? Personally I thought it was priority none-- there truly is no accounting for taste. However, I'm glad you liked it, perhaps now you will take my recommendations more seriously Mr "i've been collecting records since the seventies" ;-)
For those who are interested in the more existentialist aspects of this record, rather than a music-focused approach, please see the blog prognotfrog.