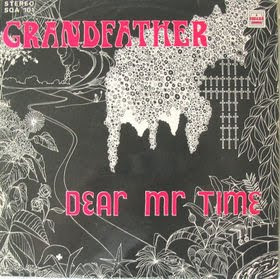 We first mentioned this reissue on November 1. Now its shaping up to be a great reissue. Label Wooden Hill states the following:

"First-ever official reissue of Essex-based band Dear Mr. Time's highly-regarded and much sought-after psych/prog concept album Grandfather. Heavily influenced by the Moody Blues and early King Crimson, Grandfather was recorded in mid-1970 and issued by the tiny Square Records in February 1971, but was only pressed in a total quantity of 1000 copies. This definitive release is taken from the original master tapes, and adds five superb home demos recorded around the same time as the album by guitarist and chief songwriter Chris Baker. It tells the group's story for the first time, and includes many previously unpublished photographs."
Posted by Purple Peak Records at 4:21 PM

This is now available on CD with bonus tracks.. hopefully a vinyl reissue for me will follow on its heels in the next few years.

Thanks Foggy Glasses. Ken at the Laser's Edge had it for about a week, but I missed buying it before he sold out. Do you know anyone else in the US who is carrying it?