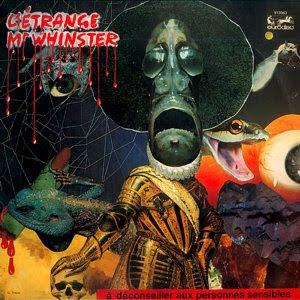 Finders Keepers is a London based label that specializes in albums with cult like followings. Mostly in the psych / funk / avant garde realms. For us at the CD RWL, they are most known for their reissue of Jean Claude Vannier's excellent "L'Enfant Assassin des Mouches". And to date, the label has been flirting with what must be considered the ultimate figure of the "cult-like following": JP Massiera. We've covered many of his albums on these pages. And no album from the master has the reputation of his Horrific Child "L'Etrange Monsieur Whinster" opus.

Our description found on the original page: "Horrific Child - L'Etrange Mr. Whinster (France) 1976 Europa. Where would the music world be without Jean-Pierre Massiera? It certainly would be a more dull place without him. Everything he was involved with can only be described as obscure. And now he's the undisputed king of the 1970's Euro oddball chase. And of all the albums he did, Horrific Child remains his most sought after, and arguably most eccentric release ever. The musical realization of a psychotronic B-Movie classic. If this were a movie, it would be on at 3:00 in the morning, on your cities' last standing UHF local station. "L'Etrange Mr. Whinster" defines Massiera's niche in life. Insanely great cover is begging for a Japanese mini-LP release."

The label says: "Part rock album, part experimental album, part imaginary horror soundtrack, L'étrange Monsieur Whinster is a psychedelic pop audio show, flowing naturally from one surprising sequence to the next. Horrific Child was the creation of one Jean-Pierre Massiera, also the composer behind the Les Maledictus Sound project from 1968. Les Maledictus Sound were an inventive, high-brow concoction of lounge-style instrumental mod big band music, with heavy brass, plucky bass and fuzz guitar. Horrific Child is certainly the logical stylistic next step from that record, evidence of the composer's having survived several years beyond the psychedelic era."

It looks like it's coming out on both CD and LP. Rarely do I take the LP reissue option, but I might in this case. Or both. It appears it will have two bonus tracks as well.
Posted by Purple Peak Records at 7:12 AM