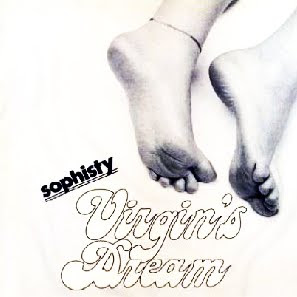 A few years ago, I received a package from Rolf Trenkler, former leader of Virgin's Dream. It contained a CD compiled from unreleased demos called "The X-Tapes" and dated primarily from 1972 (and I reviewed it for Gnosis). But there was no mention of this "Sophisty" album (maybe because he wasn't on it)! In fact, I see no similar members between the 2 albums. A similar thing happened with the band Moira, and yet there was a tie-in, just not on album. So this certainly could be the same band. The Krautrock-Musikzirkus website lists them together, as a band from Essen. But the history provided is strictly from "The X-Tapes" era. In any case, I never knew of its existence until a good friend of this site recently provided me with a CDR burn. Virgin's Dream, on "Sophisty" at least, are very much a product of the late 70s and early 80s German fusion scene. Perhaps a bit more tropical, and funky, than most. Comparisons to Michael Borner's Sun or some of Syncrises' work wouldn't be out of line. As usual, the guitar work is exemplary, a trademark of the time and place.

Priority: 3
Posted by Purple Peak Records at 6:59 AM