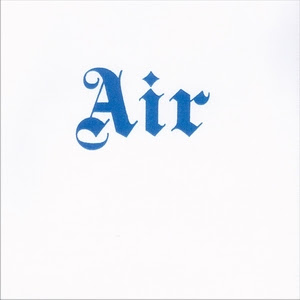 My review for Gnosis from 2006: "One of the most obscure albums from the vast Krautrock scene, Air’s sole album from 1973 has just recently surfaced to the collector’s market. It’s easy to see why. Translating more or less to “Partially Sh*t… …but in Stereo”, and featuring a plain white cover with “Air” in gothic lettering, one gets the impression this was made for fun and distributed to friends and club patrons. Musically it could be categorized as instrumental rock, not that distant from what one would find on a sound library album. That is, generic incidental music used for television and films. Maybe not 100% accurate, as these cuts do seem to be self-contained composed pieces, but similarities do exist, especially considering how simple the songs are. Organ is the featured instrument, and the tones are ancient, more akin to 1965 than 1973. It’s even older sounding than the organ used by Erlkoenig, if that’s possible. The organist doubles on flute, but the playing is more 18th century classical than Osanna. The electric guitar is primarily used only for rhythm and is lacking any kind of rock tone effects. And, of course, there is a drum solo to suffer through. The easy comparison would be the Roland Kovac New Set (another German sound library group), but misses their strong jazz background and creativity, and thus is far less interesting. In conclusion, Air is not a bad album at all, and does make for a nice curiosity."

Priority: none
Posted by Purple Peak Records at 9:57 AM