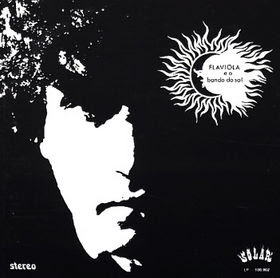 Flaviola (Flavio Lira) e o Bando do Sol is a Recife based group that came from the same batch of freaks who later created the Lula Cortes and Ze Remalho masterpiece (and on the same label). At this point I feel compelled to say this album isn't nowhere near as creative as that whacked and wonderful masterwork. Even though Flaviola e o Bando do Sol is mostly all acoustic, they have some of the same psychotic tendencies as we find on Paebiru - paradoxically combined with a hippy-dippy...Woodsy-The-Owl...sitting around the campfire style of feel-good folk. Fun stuff all around.
Priority: none
Posted by Purple Peak Records at 7:52 AM