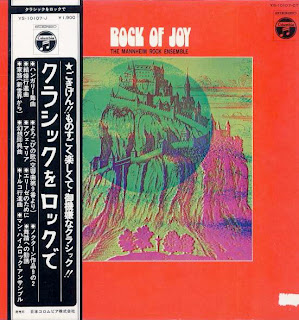 Today's review is courtesy of The AC: "So, during the boom days of the great Japanese New Rock gold rush, many, many exploitation albums were released. Major label bosses, stacks of yen gleaming in their eyes, would corral a well-known studio/jazz musician, sign him to a contract and tell him something like "Here, go and get a bunch of your weirdo hippy friends and record a rock album! What? Original material?! Are you out of your mind? Just do a bunch of show-tunes or something. The kids will love it! By the way, you have 2 days to knock this one out, so I better not see your face outside that studio until Monday! Now get lost!". Well, I don't know if that's how these conversations ACTUALLY went, but it is how I like to imagine them. In any case, most of these things were completely silly and utterly forgettable, as you might imagine. But a precious few times, a mystical thunderbolt appeared from the heavens and struck these poor bedraggled groups of talented musicians with a type of divine inspiration (or temporary insanity), and something magical was born. Well, maybe I'm getting a bit carried away here, but... Anyway, the infamous People "Buddha Meet Rock" is one such example, and here is another. Nobody's certain who actually played on this thing, as despite the extensive liner notes related to the classical pieces themselves, there are no musicians credited anywhere ("Musical credits? Who needs those?! Now take your damn checks and get outta here!"). However, it's almost a certainty that some of the usual suspects were on the job, meaning Akira Ishikawa on drums, Kimio Mizutani or Ryo Kawasaki on guitar (I'm going with Mizutani here based on style), and of course the one and only Yusuke Hoguchi and his magical exploito-organ to really get the party rolling. So, what we have here is obviously rock exploitation covers of classical music. But to leave it at that would never do this album justice. No, you just can't properly understand the true beauty of classical music until you've heard it played as crazed early 70's Japanese psych/prog full of blasting fuzzed-out wah-wah guitar solos, vintage organ assaults, and a fat, thumping rhythm section (including the wholly incongruous but oddly effective use of congas). There's even a couple of more mellow tracks, backed by a real string quartet, for you fussy types that might want to listen to some "real" classical music. Whatever, man. All things considered, this is probably one of the most entertaining albums you'll hear (or not hear, as the case may be) any time soon. Of course, it should go without saying that this thing is rare beyond belief, only a few copies known to exist, almost totally unknown, yadda yadda yadda. ("How did it sell?! Don't make me laugh! We decided to print up around 50 copies, but we gave most of them away to the secretaries at the office Christmas party, and... What's that? You want one copy to show your wife and kids?! What do you think this is, a charity?! Now get back in the studio and don't let me see your mug again until next Friday!") Sadly, an album of this ilk is unlikely to ever see a legit (or even non-legit) reissue, but the People album did, so hope springs eternal! (maybe...)."